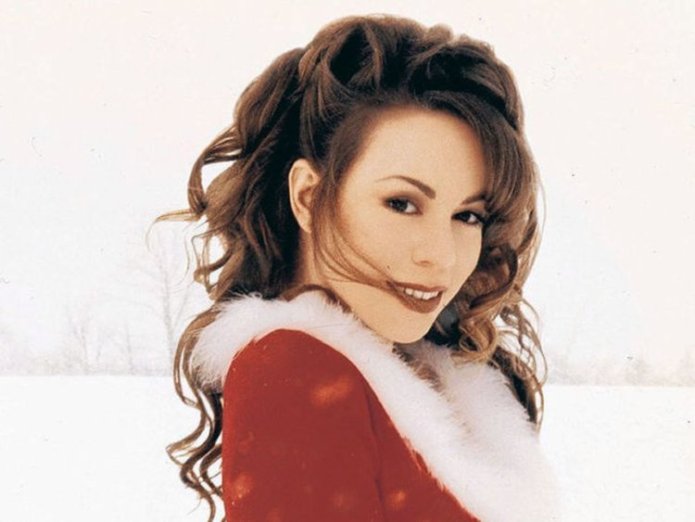 Oh, all the lights are shining so brightly everywhere

And the sound of children’s laughter fills the air

And everyone is singing

I hear those sleigh bells ringing

Santa, won’t you bring me the one I really need?

Won’t you please bring my baby to me?

Oh, I don’t want a lot for Christmas

This is all I’m asking for

I just wanna see my baby

Standing right outside my door

Oh, I just want you for my own

More than you could ever know

Baby, all I want for Christmas is you

What is the greatest Christmas song of all time? Over the past 25 years, “All I Want For Christmas is You” by Mariah Carey has become one of the most popular Christmas songs ever recorded.

Just how popular is Carey’s song?   “All I Want For Christmas is You” has been recognized for setting 3 Guinness World Records and her accomplishments will be published in the 2020 edition of the Guinness book. Here are the 3 records that Carey has broken:

“All I Want For Christmas is You” is also riding high with popularity here in 2019 as the song just reached number 1 on the Billboard Hot 100, for the week ending December 21st.   Carey’s song is just the 2nd Christmas song ever to reach the top spot on the Billboard chart (The first song to do so was “The Chipmunk Song” by the Chipmunks in 1958-59).

Since Carey’s Christmas song was first released in 1994, it has sold over 16 million units. Every Christmas season for the past 25 years, I have regularly heard Carey’s song played on Roanoke, Virginia radio stations, Top 40 K92 and Adult Contemporary Q99. Those stations are still playing “All I Want For Christmas is You” again this holiday season.

Arguably, Carey’s song is the biggest Christmas hit during the past quarter century. However, I go back to my original question at the start of this message: Is “All I Want For Christmas is You” the greatest Christmas song of all time?

I personally maintain that proclamations concerning “the best or greatest” Christmas song ever made, are rather pompous and are an exercise in futility.

Rather than ranking Christmas songs as the “best or greatest” of all time, I prefer to give acclaim to individual songs about Christmas, which are still meaningful and have lasted through the test of time.

My hypothesis on music and song likability: Generally, the songs that a person listened to as a teen or as a young adult, tend to be the songs that are fondly remembered and considered to be their favorite music selections of all time.

The most memorable and favorite songs for older adults tend to be the songs they loved during middle school, high school and college days.

For the remainder of this article, I will be highlighting Christmas songs that were first written prior to 1994. My ranking of songs will not be based on greatness or popularity. My criteria will focus on songs and artists, whom I feel are still relevant and have withstood the test of time.

When I attended the Roanoke Symphony Orchestra “Holiday Pops” Christmas concert with my wife Priscilla a couple weeks ago, I began to realize how many wonderful Christmas songs there are in western civilization. 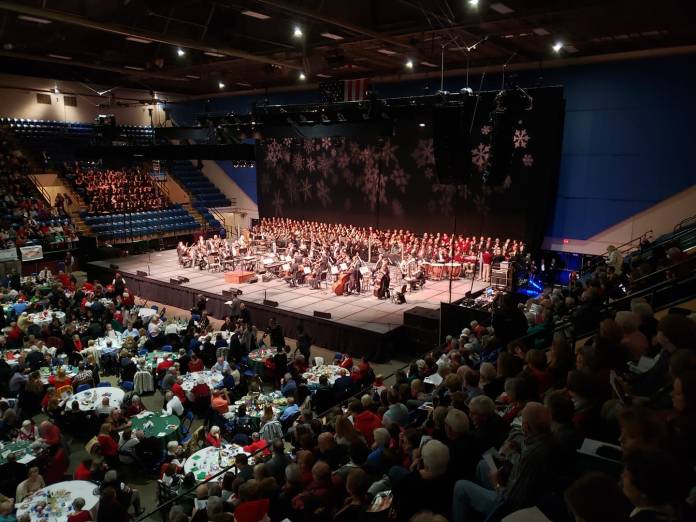 The Christmas songs that I like the most, all seem to be tunes older than 25 years old.   The Hallmark Christmas music channel on SiriusXM radio has became a favorite for me this holiday season. This station plays everything from the sounds of Nat King Cole to the modern tunes of Jen Lilley.

I do have a wide range of artists that I listen to on a regular basis for Christmas music. I can go from tuning in standard Christmas classics from Gene Autry, Andy Williams and Perry Como, to enjoying contemporary artists like Pentatonix, Mannheim Steamroller and Sara Niemietz.

Before revealing my top selections of Christmas songs, I want to document some music that I fondly remember during my childhood and are still favorites to me.

My first memories of Christmas music happened around age 10 during my childhood. Both of my parents each had one favorite Christmas album and those records were regularly played on the Woodson family RCA stereo system.

“The Andy Williams Christmas Album” was Shirley Woodson’s absolute favorite Christmas record. “It’s the Most Wonderful Time of the Year” was my mom’s most treasured song on the album. She also loved Williams’ covers of “Silent Night” and “O Holy Night.”

For my dad Andy Woodson, “The Twelve Songs of Christmas” by Jim Reeves was his favorite Christmas album. “Mary’s Boy Child” was his most loved song on the album. He also cherished “An Old Christmas Card” and “The Merry Christmas Polka.”

Around the age of 13, I began listening to Top 40 radio and I started forming my own favorite list of Christmas songs. Here are some of songs I loved during my teen years:

Middle of the Road Songs

As an adult, I expanded my musical horizons and added a couple songs from the Contemporary Christian genre to my favorite playlist.

Star Song (There Is Born a Child)—Sheila Walsh

Come On Ring Those Bells—Evie

I now humbly submit to you, my top Christmas song listing of all time. I am not declaring they are the “best or greatest” holiday songs ever made. These selections are my favorite Christmas songs that I deem to be culturally, historically, aesthetically significant, meaningful or relevant.

Obviously hundreds of artists have covered “Do You Hear What I Hear” over the years, so it is hard to choose just one version. I have selected Whitney Houston’s performance of the song that was written in 1962.

Written in Salzburg, Austria during 1818, “Silent Night” is one of the most widely acclaimed Christmas carols of all time. Hundreds of artists have recorded the song and I enjoy listening to the Temptations Motown version best of all.

Mark Lowry wrote “Mary Did You Know” in 1984 and Michael English was the first to record the tune. Mother Mary and her possible understanding with the virgin conception of Jesus, totally makes this an intriguing lyrical song. I prefer the Kenny Rogers and Wynonna Judd version of this tune.

Stevie Wonder released a Christmas album in 1967 called “Someday at Christmas” and his song “That’s What Christmas Means To Me” is the crown jewel on this recording. Wonder’s top-tapping tune continues to be a winner in my book.

The most underrated of my top 10 selections is “Christmas (Baby Please Come Home)” by Darlene Love. Utilizing Phil Spector’s, “Wall of Sound” production, Love’s emotion and excellent vocals are powerful and still sound fresh to me.

One of the best known Christmas carols of all time is “O Holy Night” which was written in France during 1847.   Many have recorded the song but my favorite rendition is by Martina McBride. The country music singer provides outstanding vocals with her recording on the song.

Originally released in 1970, “Merry Christmas Darling” was a perennial Christmastime hit on Top 40 radio during the 70’s decade for the Carpenters. Karen Carpenter’s vocals are superb: Haunting, longing and inviting. She had one of the purest voices in pop music when this song was recorded.

Known as “Chestnuts Roasting on an Open Fire” by many folks, “The Christmas Song” was written in 1945 by Robert Wells and Mel Tormé.   My favorite version of the song is by Nat King Cole and his rendition was inducted into the Grammy Hall of Fame in 1974.

One of the most melodic Christmas tunes of the past 30 years is the song Amy Grant wrote with Chris Eaton, “Breath of Heaven (Mary’s Song). The lyrics are written from Mary’s perspective of the nativity story with Jesus’ birth. Grant’s tender vocals are exceptional on this modern day Christmas classic song.  My second favorite Christmas song of all time.

Irving Berlin wrote the lyrics to “White Christmas” in 1942 and Bing Crosby’s version is my number one all time favorite Christmas song. The song has sold over 50 million units worldwide and is the biggest selling single ever recorded.   “White Christmas” is ranked number 2 on NPR’s “Songs of the Century” listing and is in the Library of Congress, National Recording Registry.   Without a doubt, “White Christmas” is the most beloved holiday song ever made.

Now that you have viewed my selections of what I consider to be the top Christmas songs ever made, I want to pose the question again: Is Mariah Carey’s “All I want for Christmas is You” the greatest Christmas song of all time?

My answer is no. Although I do not want to disrespect those who place Mariah Carey’s song as the greatest Christmas song of all time, I respectfully submit that “All I Want For Christmas is You” is a wonderful holiday tune but hasn’t yet weathered the test of time.

“All I Want For Christmas” has achieved great accolades over the past 25 years since Carey’s song was released and most likely will be highly rated during upcoming Christmas seasons during the 2020 decade. However, comparing the current number 1 song in America with Christmas songs like Irving Berlin’s “White Christmas” is completely unfair to Mariah Carey.

Those are my thoughts on Christmas songs. Obviously, I do not want to come across as authoritative with my critique of Christmas music. Your top selections of Christmas songs could be totally different than my picks. There are no right or wrong answers on this topic.

I welcome your thoughts and comments.

I close with the lyrics to the greatest Christmas song ever made:

Where the treetops glisten

To hear sleigh bells in the snow

With every Christmas card I write

May your days be merry and bright

And may all your Christmases be white

Where the treetops glisten

To hear sleigh bells in the snow

With every Christmas card I write

May your days be merry and bright

And may all your Christmases be white

10 thoughts on “What is the Greatest Christmas Song of All Time?”