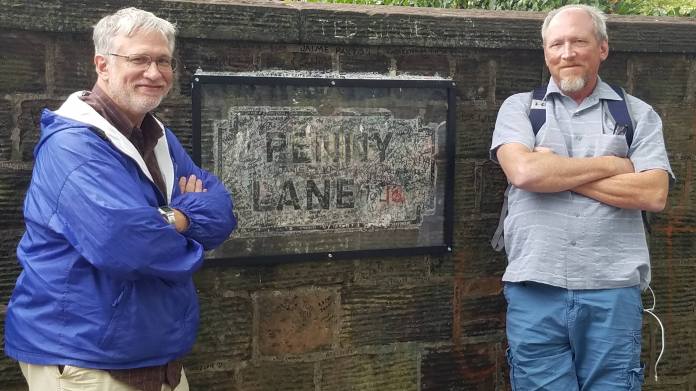 “Penny Lane is in my ears and in my eyes, there beneath the blue suburban skies” is the chorus to my 2nd favorite Beatles song of all time, “Penny Lane.” During August 2018, brothers Dave and Steve Delaney had the opportunity to visit Penny Lane in Liverpool and to tour the Abbey Road Studios in London as part of their Beatles pilgrimage to England. I will be chronicling Dave & Steve’s journey to various Fab Four sites during their Beatles excursion.

Recently I had the opportunity to interview the Delaney brothers to hear their stories as they reminisced about their Beatles trip. It was a wonderful time viewing their photos as they shared various experiences while visiting Beatles sites in England.

I first met Steve while we were both students at James Madison University in Harrisonburg, Virginia during the late 70’s. Steve and I also worked together at public radio station WMRA 90.7 FM during that time period. Dave and I first met at Roanoke College during my daughter Amy’s graduation in May 2011.

Over the course of the past few years, I came to discover the love that Dave and Steve have for the Beatles. I actually saw them at the end of a Paul McCartney concert that all three of us attended in Greensboro, North Carolina back during October 2014.

Before I start describing the brothers’ Beatles trip, here is a little bit about each brother:

Steve provided the following bio: “Steve Delaney has worked for Virginia Beach Public Schools for 23 years, and is currently serving as an Instructional Technology Specialist. He graduated from James Madison University in 1982 with a degree in Communications. While at JMU, he fostered his love of music of many genres by working at public radio station WMRA. He lives in Virginia Beach with his wife and daughter, who both share his love of the Beatles.”

Bio for Rev. and Dr. David Delaney: Since 2001, Dave has been as Director of Youth and Young Adult Ministries for Lutheran churches in Virginia (Virginia Synod ELCA). He also teaches part time in the religion and philosophy department at Roanoke College. Dave also was the pastor for several Lutheran congregations in Virginia prior to 2001. He holds an undergraduate degree from Wittenberg University, a degree from Trinity Lutheran Seminary and received his PH.D. in Early Christianity and Judaism at University of Virginia. Dave married his wife Nancy in 1980 and they have two daughters. 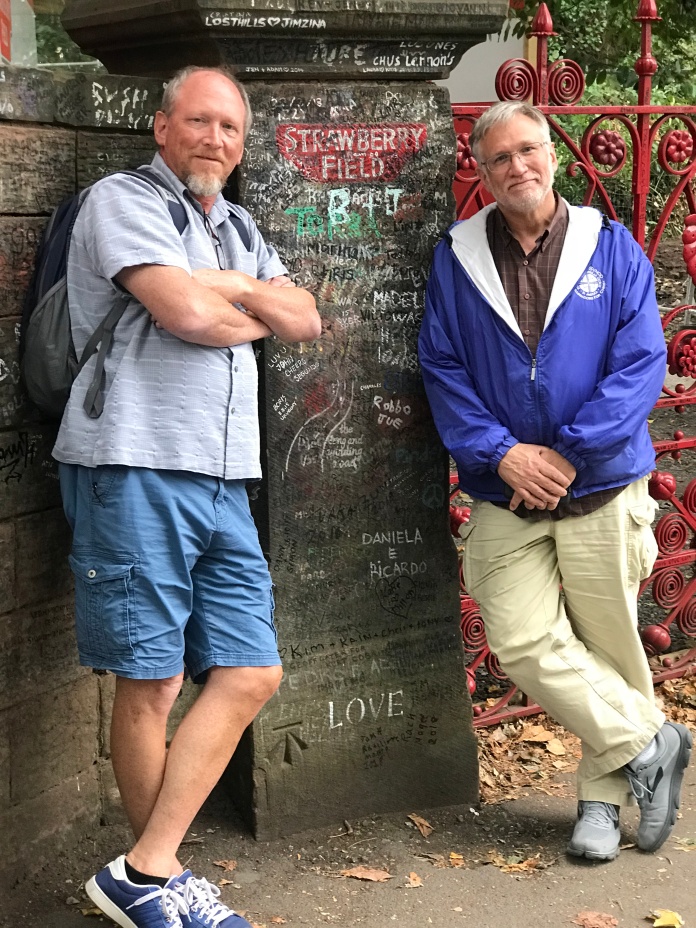 The first vivid memory that Dave has of the Beatles came during 1964 when the Delaney family was at a fast food restaurant in Beckley, West Virginia. Dave was 6-1/2 years old at the time and all the tables had a jukebox. While at the restaurant, someone selected “I Want To Hold Your Hand” on the jukebox and Dave then described to me what happened next:

“I was immediately smitten and started dancing in my seat. I remember my parents looking at me with resigned concern as if to say, “Oh no – he likes it.” Steve, 3 years younger, was next to me and I seem to remember him reacting the same way, although I don’t know if it was the music or my twitching around that was bringing it on.   Anyway, the rest, as they say, is history.”

The catalyst for Dave and Steve traveling to England and checking out all Beatles locations was the opportunity to tour Abbey Road Studios (formally known as EMI). This recording studio is where the Beatles recorded most of their music from 1962 until the group split up in 1970.

Sound board inside Abbey Road Studios

So how did Steve and Dave get to tour the legendary Abbey Road Studios (ARS), since that facility is not open for regular tours? Dave read about a lecture series that ARS was conducting in August and obtained tickets for the event. As part of the lecture, attendees were given a full tour of the ARS facility at the end of the lecture. This was a dream come true for the Delaney brothers.

“The Studio That Became A Legend” was the name of the lecture that Steve and Dave attended at ARS.  Here is what Steve had to say about his experience at this site:

“After being inside Abbey Road Studios, seeing the pianos and vintage equipment, and spending the day in Liverpool, I hear Beatles music with a new set of ears. I’m working my way through listening to the Beatles’ body of work again, and have a new, fresh perspective. It’s wonderful.”

Being inside ARS was also meaningful for Dave. Here is what he had to say:

“Visiting Abbey Road Studios and walking across “the crossing” is something I had always hoped to do, but I never dreamed I would have the chance to go INSIDE and be in the very same room where the Beatles recorded some of the most famous music of all time! To spend time in Studio 2, where the magic happened, and so many landmark conversations took place, was beyond all expectations.”

Later on that day, the Delaney brothers walked the famous Abbey Road crosswalk, just like the Beatles did in the summer of 1969 and thousands of other Fab Four fans do on a monthly basis.

One other place of interest that Dave and Steve visited was the house that Paul McCartney bought in 1965 located on 7 Cavendish Ave. in St John’s Wood, London. The brothers Delaney then finished up day one touring regular tourist attractions like Big Ben, the London Eye and Buckingham Palace. 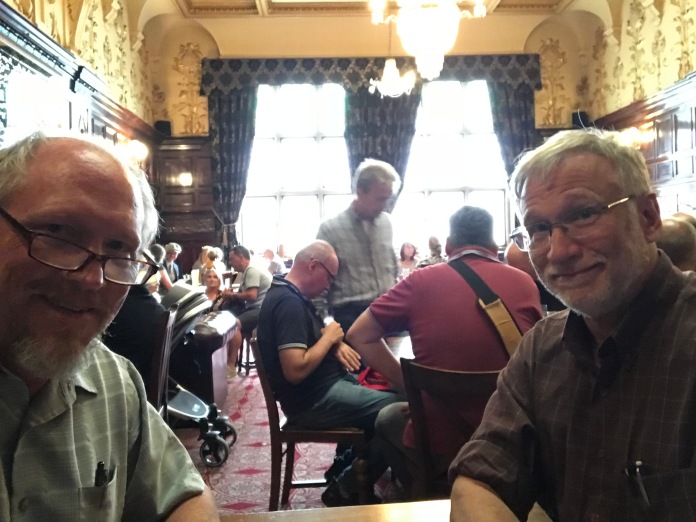 After checking out that museum, the brothers went to the Philharmonic Pub, which was the site of Paul McCartney’s small intimate “concert” that was featured on James Corden’s Carpool Karaoke segment in June 2018. Unfortunately, Sir Paul wasn’t performing at the pub the day Dave and Steve were at this establishment.

After lunch, Steve and Dave hailed a taxi and took a personalized two-hour tour of Liverpool for only 50 pounds.   During this time, the cab driver played Beatles music in the cab while driving and when stopped, he acted as a tour guide for the various Beatles-related places of interest.

One of the stops on the taxi tour was “beneath the blue suburban skies” of Penny Lane. This famous street is a main thoroughfare in Liverpool and the brothers visited several of the locations mentioned in the song “Penny Lane” including the barber shop and the roundabout. The bank building is now home to another business and the fire station is longer found on the corner. 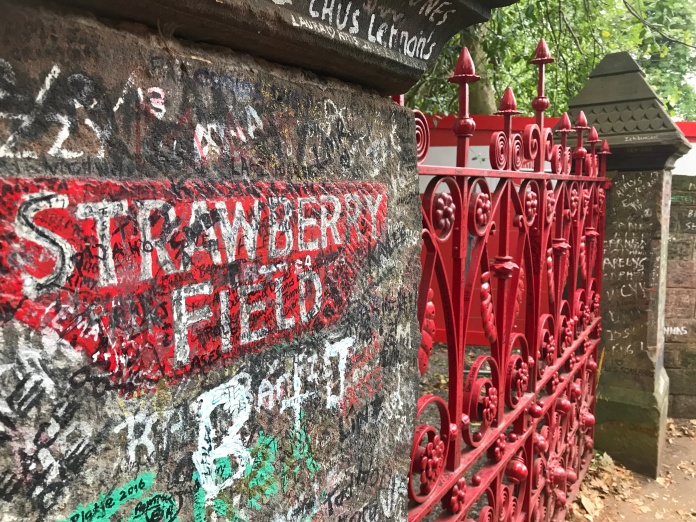 Another site brothers Delaney visited on the taxi tour were the gates at Strawberry Field. The building associated with that area was a children’s home but it is now being renovated. Plans are to open up the grounds for visitors and to have an exhibition center dedicated to the place and song of “Strawberry Fields Forever” in the future.

The final stop for Dave and Steve was St Peter’s Church. It was at the church’s yard that Paul McCartney met John Lennon for the first time. Here is Dave’s communication on why this site was important for him to view:

“My number one goal in Liverpool was to go and stand at the place where the Quarrymen had performed on July 6, 1957, the day that Paul came and saw them and later on met John. I finally have a 3-D visual on St. Peter’s churchyard and the Parish Hall for the day that is often called the “Big Bang” of the Beatles. I did manage to get a nice photo of myself there and put it side by side with the famous photo of John performing with the Quarrymen in roughly the same spot.”

Once the taxi tour was finished, it was time to head back to London for the Delaney brothers. After spending the night in London, the Beatles pilgrimage was at its end. Steve and Dave then headed back to Virginia, via a short visit to Iceland. It was an extremely satisfying trip for the Delaney Brothers.

Dave summed up the trip with these words: “It’s hard to believe that we were in England for just two days – we packed so much into that brief time that it felt like weeks. I suppose it would take weeks to actually see everything related to the Beatles in both London and Liverpool. Where next, then, Hamburg?”

Being huge Beatles fans, this was a trip of a lifetime for Steve and Dave. After I listened to their stories and viewed the photos of their trip, I am ready to sign up for the next lecture series held at Abbey Road Studios. One day I hope to experience London and Liverpool Beatlemania for myself.

Thanks to Dave and Steve for allowing me to share the story of their Beatles pilgrimage to London and Liverpool, England. Rock on!

9 thoughts on “Dave and Steve Delaney: Beatles Pilgrimage to England”