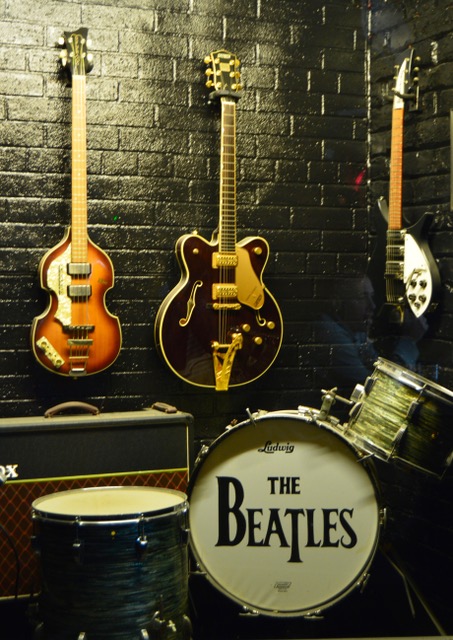 I wonder if you can

No need for greed or hunger

A brotherhood of man

Imagine all the people

Sharing all the world…

You may say I’m a dreamer

But I’m not the only one

I hope someday you’ll join us

And the world will live as one

Imagine if you were inside the childhood house of Paul McCartney in Liverpool and a tour guide invites someone on the tour of the home to play a song on Paul’s piano? It may sound like a dream but it actually became reality for Beatles fan and Roanoke, Virginia native Gayle Deel.

While on tour at McCartney’s home, Gayle played John Lennon’s signature song, “Imagine” on the same piano that Paul himself played and sang “When I’m 64”, along with James Corden, on a June 2018 Carpool Karaoke episode of The Late Late Show. It was truly one of the highlights of Gayle’s trip to England to visit multiple Beatles sites during September of last year.

I first came in contact with Gayle shortly after I published Dave & Steve Delaney: Beatles Pilgrimage to England on my blog last October. Through our mutual friend Bruce Bias, Gayle and I communicated about me possibly sharing her Beatles experience after she enjoyed reading about the Delaney Brothers Fab Four trip.

Earlier this month, I interviewed Gayle about her trip to England and a secondary visit to Iceland to visit a John Lennon memorial, The Imagine Peace Tower. Gayle’s passion and knowledge of the Beatles was evident as she reminisced about various things associated with the band that got their start in Liverpool.

As a retirement gift to herself, Gayle Deel planned a trip of a lifetime: Touring Beatles sites in London and Liverpool, England. Gayle retired from the Veterans Administration Hospital in Salem, Virginia where she worked in the Radiology department for many years. 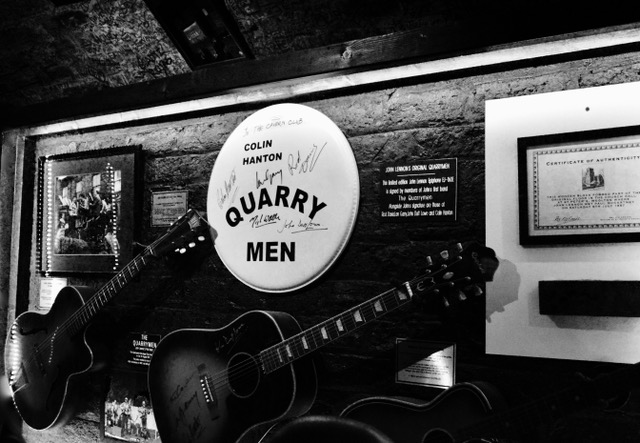 Exhibit at the Cavern Club in Liverpool, England. Photo by Gayle Deel.

Accompanying Deel on the trip were her brother Douglas Nauman of High Point, North Carolina and her boyfriend Douglas Rhodes of Roanoke, Virginia. The three embarked to England on September 11, 2018 and spent 7 days viewing various Beatles sites in Liverpool and London.

Gayle’s love for the Beatles began on February 7th, 1964 when she watched the CBS Evening News with Walter Cronkite with her father. As Gayle stated to me, “I fell in love. My dad just shook his head.”

Deel went on to say, “That’s when I became a Beatle devotee for life and I anxiously awaited any magazine that was published just to own a piece of them in print. My only prized possession at that time was a 45 rpm “I Want to Hold Your Hand” –played repeatedly on a portable turntable.”

After getting off the airplane at England’s Heathrow Airport, Gayle and her traveling companions boarded a train in London bound for Liverpool. Gayle mused on that initial train ride: “I just knew it was going to look like the same train: I hear “A Hard Day’s Night” (from the 1964 movie where the Fab Four ride on a train from Liverpool to London).

The first location the trio visited in Liverpool was the Cavern Club. The Beatles played many concerts there during their early days as a band but the original building was closed in 1973 due to construction on a new underground rail loop. A new building for the Cavern Club came in 1984 and this site is now one of the most visited tourist sites in England. 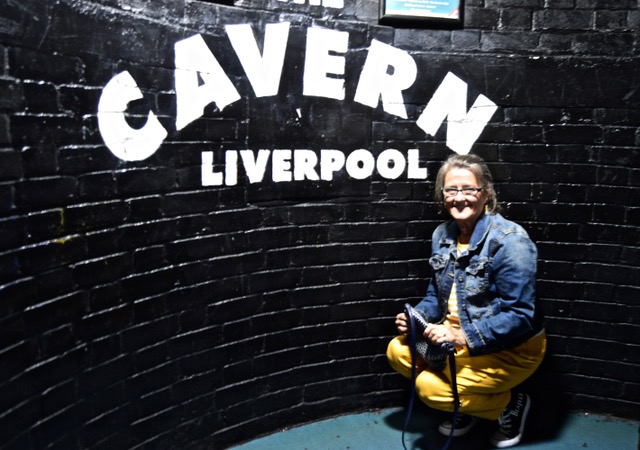 Gayle accounts her experience at the historic music site in Liverpool: “The first stop was the Cavern Club, taking the steps down into the cellar with music flowing, signatures of thousands across the ceiling and “The Stage” where my heroes began their journey. All I could hear was “I Want to Hold Your Hand” and “Twist and Shout” in that hallowed cellar.”

Every Beatles fan has a favorite Beatle, and Gayle has been a John Lennon fan since the days that the Fab Four performed on the Ed Sullivan show during February 1964. She shared with me that visiting Lennon’s Liverpool childhood home was her favorite event on the Beatles pilgrimage. 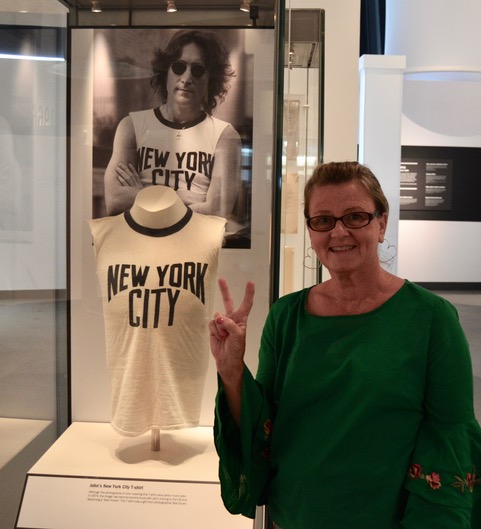 Here is Gayle describing her tour of the Lennon home: “It was emotional to walk into the back yard and enter the kitchen knowing John had been through that door many times with friends such as Pete Shotton, Ivan Vaughan and sometimes Paul McCartney. The most chilling was being in the small bedroom where John spent young years and teenage years reading about other musicians, listening to American artists and beginning to craft his own musical talents.” 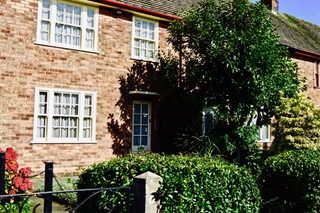 Gayle’s second favorite visit on the trip was her visit to Paul McCartney’s home on 20 Forthlin Road in Liverpool. Gayle also shares her thoughts on this memorable happening:

“On to Paul’s home – the second thrill of my trip, because it was here that I played, in his living room, the very same piano that THE Paul McCartney had played. Actually the song that rolled off my fingers was “Imagine” by John Lennon, not a McCartney song. But I found it applicable as I had imagined many times the reuniting of these two brilliant musicians. Another young Beatle fan joined me and we played “Let It Be”. He with the melody and me on the chords. I’ll never forget it!”

The other tourist stops on the trip to Liverpool are too numerous to name. Here are some of the highlights: 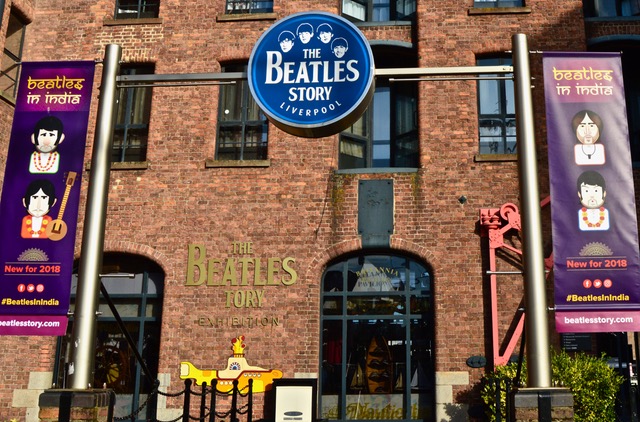 After spending a few days in Liverpool, it was then time to take what Electric Light Orchestra sang about in 1979, the “Last Train to London.” The next day, Gayle’s touring group hit various Beatles sites in and around London.

The first memorable site Gayle visited was 3 Savile Row, which was the location of the Beatles last live performance ever: The Rooftop Concert. This mini concert became the climax of the 1970 documentary film “Let It Be.”

Visiting 3 Savile Row was a surreal experience for Gayle as she shared with me,

“The Beatles’ rooftop concert with Billy Preston, was the last time the group ever played together as a band. The Apple building was once owned by all four Beatles and each had an office in that structure. I went in and experienced being in the former beautiful wooden offices, now lined with clothing to purchase. What a shame this building is not a museum. I hear, “Get Back.”

The other highlight for Gayle in London was visiting Abbey Road. The iconic street is known around the world as John, Paul, George and Ringo were photographed walking across thoroughfare and the Beatles made it the front cover of the “Abbey Road” album. In Gayle’s words, “The walk across “Abbey Road” in London: no words can explain and then to turn and see Abbey Road Studios. I hear “Come Together.” 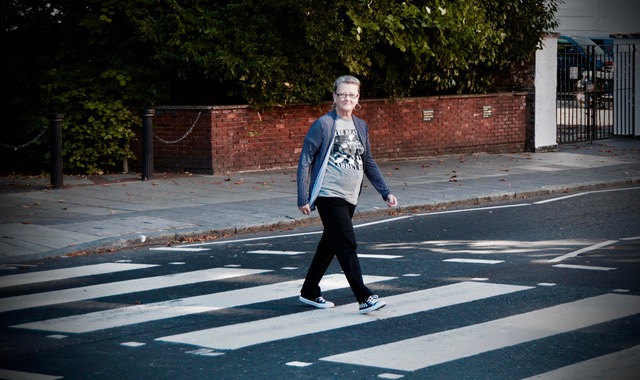 As trips go, Gayle, her brother and boyfriend all enjoyed their Beatles trip to England. However, Gayle wasn’t finished visiting sites associated with the Beatles.

On December 4th of last year, Deel and her boyfriend Douglas Rhodes went to Iceland to view the Imagine Peace Tower.

The memorial to John Lennon by his widow Yoko Ono, is dedicated to peace, and the tower’s name comes from Lennon’s signature 1971 solo hit song, “Imagine.”

Gayle had a wonderful experience visiting Iceland and the Peace Tower. Here are some of her thoughts as she recalls visiting the Nordic island country in the North Atlantic. 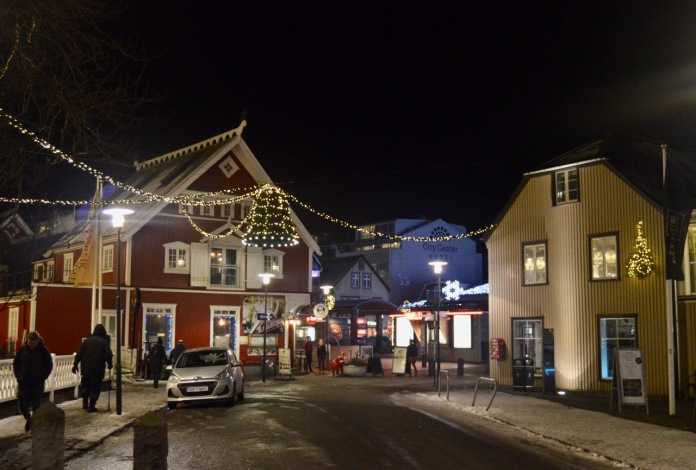 “Iceland is a beautiful country. The air is clean and crisp and it is a quiet, peaceful country. It looks like a scene from Santa’s workshop.”

“The Peace Tower is located on Viday Island and a boat ride is required to get that location. We went at night. It was cold, windy and there were several inches of snow on the ground. We made the trek up the hill to the beautiful monument that shone a blue light into the heavens. Engraved on its’ sides is “Imagine Peace” in 24 languages. It is inspiring and moving. Yoko has also placed a stone that says: “I dedicate this light tower to John Lennon. My love for you is forever – Yoko Ono October 9, 2007.” 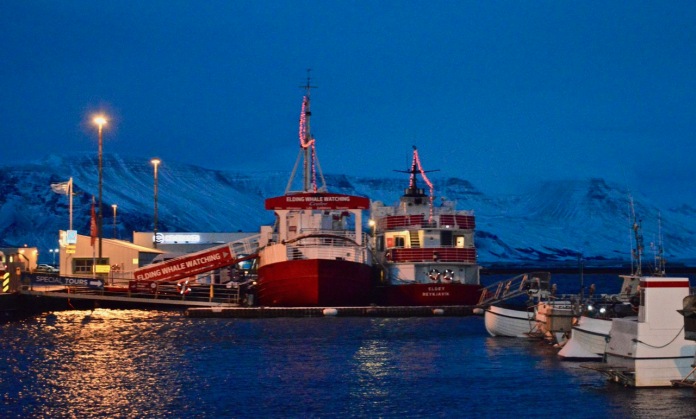 “Yoko chose Iceland with the blessings of the Icelandic people to build the monument there because it is between Liverpool, England, the land of John’s birth and New York City, the city he loved as it reminded him of Liverpool. Iceland is also considered the most peaceful country in the world – thus The Peace Tower.”

“The light is visible for many miles and the blue hue of the light just exudes a peaceful feeling and a yearning for self and world peace. The sole purpose of this trip was to experience that peace. And it happened: I hear ”Give Peace a Chance.”

As you can tell from Gayle’s writing above, she was deeply moved by her time in Iceland visiting the Imagine Peace Tower. She told me during our interview that she would like to revisit Iceland again in the future. 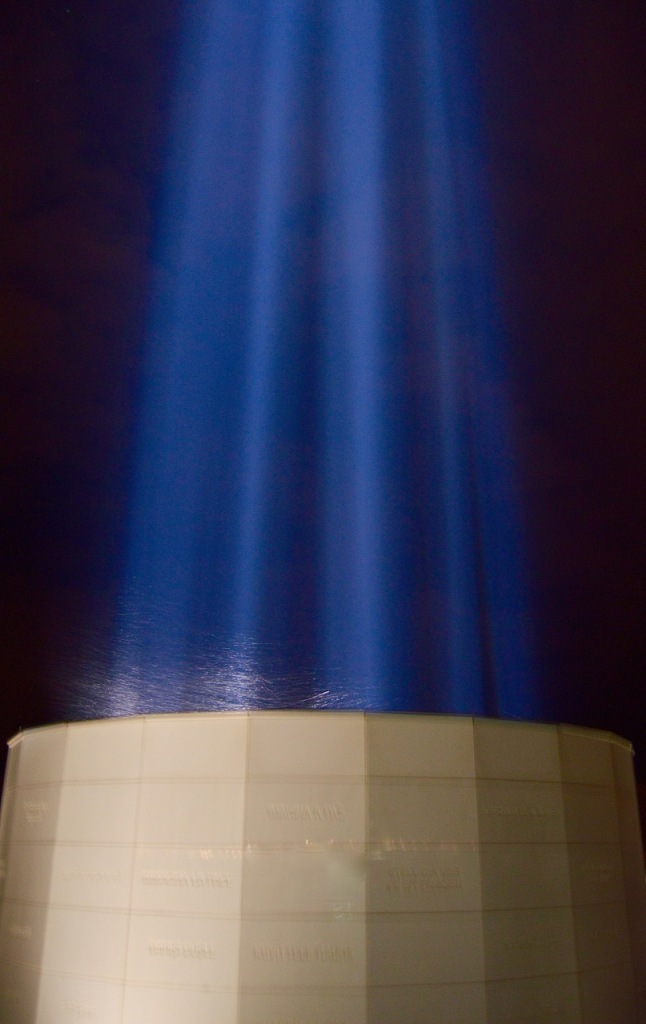 Next up on Gayle’s bucket list is visiting Bermuda. This was the location where John Lennon wrote the songs for his last album, “Double Fantasy” which was released just prior to his assassination on December 8th, 1980. Gayle would love to listen to Lennon’s song, “Watching the Wheels” while visiting the Caribbean Island.

Now that Gayle is retired, she has taken up photography. You can view some of Gayle’s photography work on Facebook here: https://www.facebook.com/gaylendeelphotography/

Thanks to Gayle for sharing her pilgrimage to England and Iceland. After hearing and writing about her experiences, this Beatles fan is ready to travel in England and beyond to visit Fab Four sites.

These are Gayle Deel’s words to live by:

You may say I’m a dreamer

But I’m not the only one

I hope someday you’ll join us

And the world will live as one