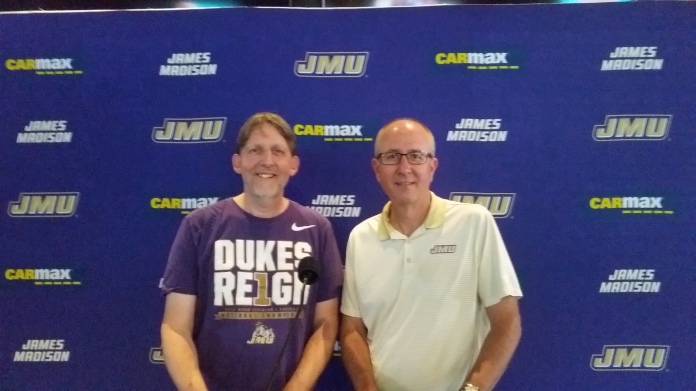 “I read the news today, oh boy, about a lucky man who made the grade” is the opening line to the Beatles legendary 1967 song, “A Day in the Life.” Those lyrics easily describe the daily activities of Curt Dudley, who is Director of Broadcast Services, Athletics and Communications at James Madison University (JMU) in Harrisonburg, Virginia.

One of Curt Dudley’s nicknames is “The Voice of JMU Athletics” and the university is fortunate to have him as chief ambassador for the JMU Nation. I recently had the opportunity to spend some time with Dudley on JMU’s campus and to experience a “day in his life.”

Dudley oversees the dissemination of all varsity sports news for JMU in a variety of ways. He functions in the traditional role of a sports information director, but also utilizes 21st century multimedia technology to distribute JMU sporting news in fresh and exciting ways.

The most intriguing new technology Dudley has developed is MadiZONE HD SportsNet. Created in 2012 under Dudley’s direction, MadiZONE is an online channel that JMU fans can use to stream live sports events. The MadiZONE media team is made up of JMU “students with interns, practicums and volunteers who assist in producing the video and audio content for the channel” according to JMUSports.com.

Dudley’s current career path began while he was attending Bridgewater College (BC) during 1980. While at BC, he developed the first Sports Information Director position and held that position for a total of eight years. Dudley received his B.S. degree from BC in 1983 and was active in the Bridgewater, Harrisonburg and Rockingham County sports community during that time period.

Then in 1988, JMU hired Dudley as Sports Information Director (SID) and he held that position until 2006. During his time as SID, he was an announcer/analyst for JMU football and men’s basketball games as well as many other sporting events. He had the pleasure of being in Chattanooga, Tennessee and announcing when the football team won the I-AA National championship in 2004.

During a typical day, Dudley wears many hats and partakes in various activities related to JMU sports. Most mornings, he uses social media outlets like Twitter and Facebook to communicate JMU sporting news to the world. When JMU hosts home games for varsity sports, many times Dudley will be the main announcer for games that will be aired on MadiZONE.

This fall you will be able to hear Dudley on MadiZONE HD SportsNet as he will be one of three announcers broadcasting all of the Dukes home football games at Bridgeforth Stadium.

My day with “The Voice of JMU Athletics” started at his JMU Sports office, located just a few blocks from the university campus. I met Dudley for the first time that morning and he was welcoming and open with me as we discussed the upcoming schedule for the day. We also talked about our shared experiences at JMU: being involved in radio broadcasting and the Communications department (now known as SMAD) at the university. 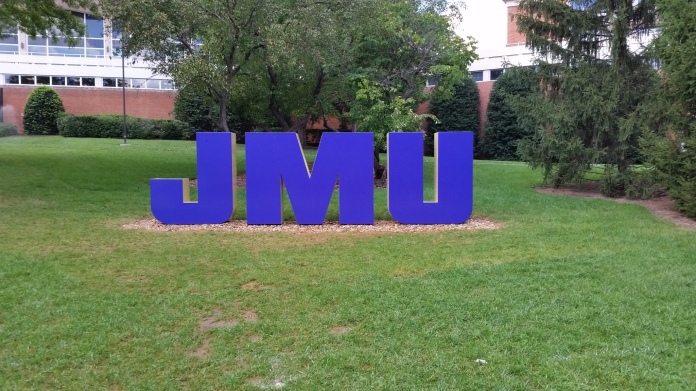 Once our introductory time ended, we headed over to Moody Hall on the JMU campus, where Dudley teaches a sports broadcasting course. Attending this class was extremely meaningful to me since I am a 1980 graduate of James Madison University with a B.S. degree in Communication Arts. This was the very first time that I had been back in a JMU classroom in over 38 years and fond memories flooded my mind during this class time.

If I were attending JMU as a student in 2018, I would want to sign up for Dudley’s class. His presentation of the material is excellent and I am confident that his students will be learning the proper ways to communicate. He was affirming to his students and set positive parameters so that they could succeed in this course.

It was interesting to me that of the thirteen students who were in Dudley’s class, four of those students play varsity sports and one other student plays a club sport. Before the class started, I spoke with senior Sarah Salzman, who is a goalie for the JMU club lacrosse team. Sarah and I communicated about the differences of JMU between when I attended the university and how things are now on campus.

At the end of the class, I met students Lauren DuVall and Shannon Quinlan from the JMU lacrosse team that won the 2018 D1 Women’s Lacrosse National Championship in May. Both Lauren and Shannon shared with me how thrilling it was to be on the Dukes national championship team last May. Curt Dudley was at the championship game and announced the game for MadiZONE. You can hear his voice on the video below.

(Video of JMU 2018 DI Women’s Lacrosse National Championship with the voice of Curt Dudley announcing throughout on May 26th, 2018)

After the class concluded, Dudley and I walked on campus. I was amazed by the number of students that Curt knew and that he actually called each one of these individuals by their first name. Dudley was personable to everyone that he saw during the time that I spent with him.

The next major event on tap that day was a JMU Sports press conference with the Dukes head football coach Mike Houston. This event regularly happens every Tuesday at 12-noon during the school year at O’Neill’s Restaurant in Harrisonburg. During most weeks, multiple Dukes coaches speak at the JMU Sports press conference but on this day Coach Houston was the only coach to speak. 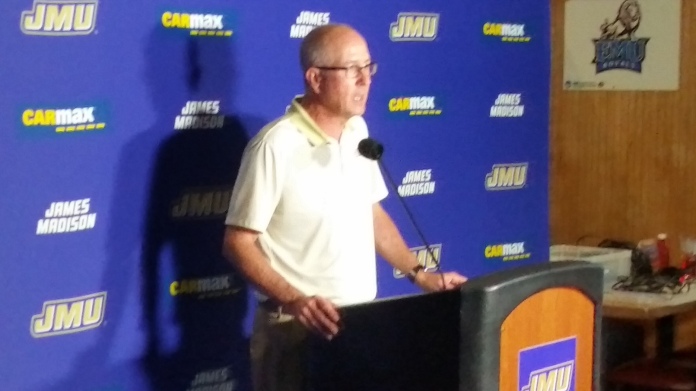 The set up for the press conference was fascinating to watch. Dudley’s crew put together a JMU backdrop board that started on the floor like an accordion and then was lifted up by a couple of crew members into the final place directly behind the podium. Of course, audio and video equipment also have to be all in working order prior to the start of the press conference.

Before the conference began, I got to meet Dave Thomas, who is the JMU Sports Network’s play-by-play announcer for the football and men’s basketball teams. Thomas was doing a live broadcast of the press conference on 1360 ESPN Radio. I also got to see Clayton Metz, who is the director of video content for athletics at JMU. I have known Metz since he was a teenager so it was good connecting with him at this event.

Coach Houston first spoke about the JMU game with NC State and then took questions from the press corps. After the completion of press conference, I had the opportunity to meet Coach Houston along with his wife Amanda (who happened to be sitting next to me while her husband was conducting his press conference). Both Mike and Amanda were cordial and friendly to me.

The breaking down of equipment and lunch were in order after the press conference ended and then it was time for Dudley and I to end our time together. We said our goodbyes and then I went back over the to JMU campus to walk on the quad and soak up some afternoon sun before heading back home to Roanoke. It was an extremely satisfying day for me in Harrisonburg.

Before I came to Harrisonburg on this day, I had asked friends of mine who knew Dudley this question: “What are your thoughts on Dudley and his role with JMU sports?” All responded to me with positive attributes: Caring, thoughtful, professional, personable, engaging, likable, knowledgeable and understanding. Dudley is much beloved on the campus of JMU.

One other important aspect that individuals mentioned to me was Dudley’s attention to all JMU student athletes. As I understand, he regularly interacts with student athletes and has the goal to communicate with each of these individuals over the course of the school year. Dudley is most beloved by all of the student athletes at JMU and he received the James Madison Athletics Unseen Hero Award during April 2018, being recognized for his work with the JMU Athletics department as a member who works outside of the public spotlight.  It was a well deserved award for Dudley.

After I spent my day with Curt, I would have to say that I totally agree with the assessments of those folks on his positive traits as a leader. JMU Nation is extremely fortunate to have the Dukes chief ambassador Curt Dudley as the “Voice of James Madison University Athletics.”

2 thoughts on “Curt Dudley: A Day in the Life”