1980 was a transitional year.  Musically, disco was dead and it was prior to the synth-pop, MTV explosion that happened the following year.  The backlash against disco was strong.

Songs from films were also popular on the radio in 1980.  Music from “Urban Cowboy” and “Xanadu” were on the hot rotations of many Top 40 outlets.

If I had been programming an AOR radio station during 1980, here are the ten albums that I would have featured on my station’s hot rotation.  There are no rankings with my list.

Album cover: “The River” by Bruce Springsteen. One of my favorite albums from 1980.

Other areas of transition for music during 1980:

Changes also happened in my personal life during 1980.  I graduated from James Madison University (JMU) in Harrisonburg, Virginia and located back to my Roanoke, Virginia home in May.  I have fond memories of my time attending JMU and working at radio station WMRA. 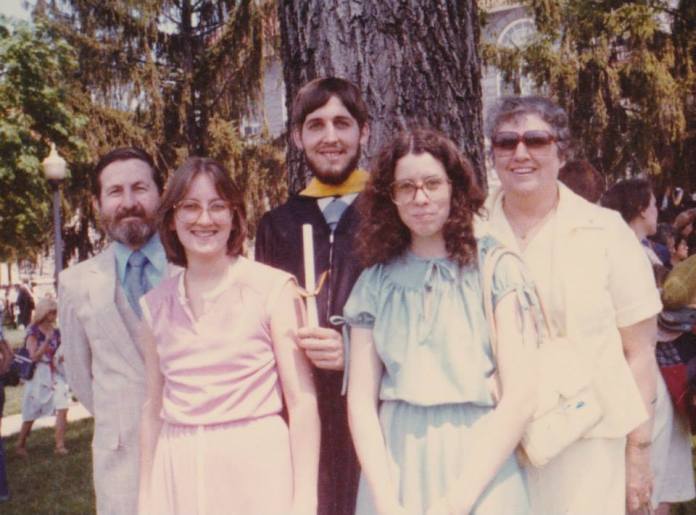 My parents Andy and Shirley Woodson, along with my sisters Kathryn and Lisa:  With me just after my graduation from James Madison University in Harrisonburg, Virginia. May 1980

While I was a student at JMU from 1978 through 1980, I was employed by WMRA Harrisonburg, a Public Radio station serving the Shenandoah Valley.  As a college student, I always scheduled my JMU classes not to interfere with my various shifts at the radio station.

During my senior year at JMU, I was the producer and radio host for the program called “Country Afternoon.”  This daily Monday through Friday mid afternoon show featured bluegrass, folk and old-time country music.  Below is an aircheck of me hosting Country Afternoon on 3/31/80.

Another program that I hosted on a regular basis was an album rock show called “After Hours.”

This AOR broadcast happened Monday through Friday between 10:00 PM and 2:00 AM. I also have an aircheck of when I hosted After Hours on 4/1/80 below.

Since I started my radio career at legendary Top 40 WROV 1240 AM Roanoke in 1974, I always have been drawn listening to any radio station that featured the Top 40 format.

My time in Harrisonburg gave me an opportunity to hear various Top 40 stations on any given day.  The local Top 40 station that most JMU students listened to was WQPO 101.7 FM in Harrisonburg, I didn’t care for that station as it was automated with no live DJs.  I preferred tuning in WWWV 97.5 FM in Charlottesville as they were an AOR formatted station.

To get my fix of Top 40 radio while I was a student at JMU, I would listen to stations out of Richmond, Roanoke and the Washington DC radio markets.  Picking up these stations tended to be hit or miss, depending on the weather conditions. Cloudy days seemed to be the best opportunity hearing these signals coming in strong at my Harrisonburg home.

These are the Top 40 radio signals that I could pick up on a regular basis in Harrisonburg during 1980:

How I listened to music in 1980. My parents gave me a Sony “Boom Box” for Christmas that year.

Between Christmas and New Year’s Eve 1980, I remember listing to Roanoke Top 40 stations K92 and WROV on my new Sony Boom Box, as they played the biggest hits during that year.  What were the most popular singles of 1980?   Here are the Top 10 Songs on the 1980 Year-end Top 100 Songs according to Billboard: 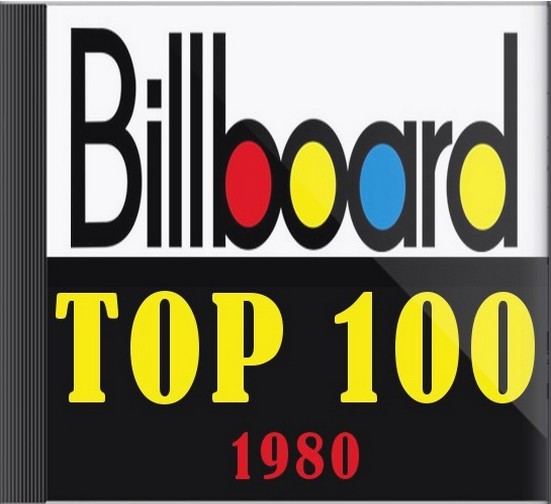 For the rest of this message, I will be counting down my Top 20 singles from 1980.  If a song didn’t make the Billboard Year-End Hot 100 singles chart of 1980, then I didn’t consider listing that song on my Top 20 countdown.

The 20 songs from 1980 that I have selected all meet certain criteria:  These selections happen to be my Top 20 personal favorites from 1980:  The songs are not dated and still sound fresh to me 40 years later.  I deem the songs to be culturally, historically, aesthetically significant, meaningful or relevant.

Before I reveal my Top 20 songs, I want to share with you some of the artists who charted with either double or triple hits within the Billboard Top 100 chart for 1980: 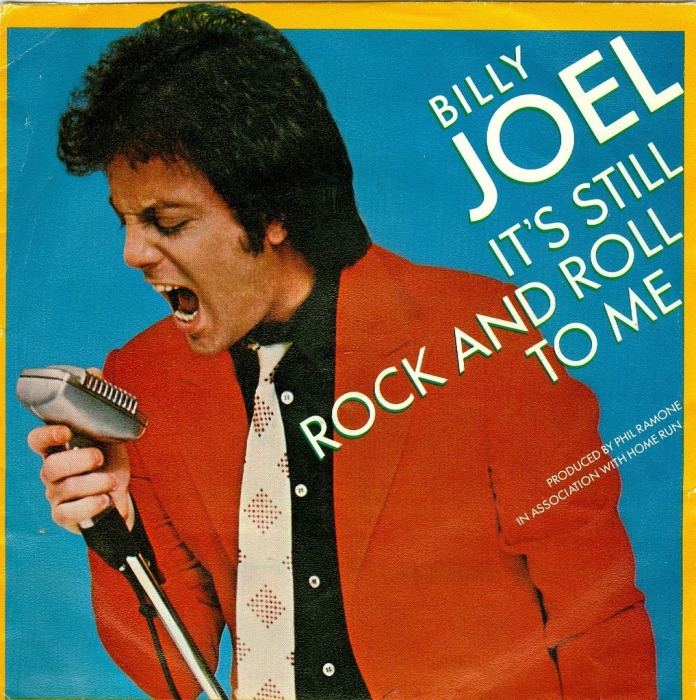 My go to reference for highest peaking chart positions with my Top 20 songs is, “The Billboard Book of Top 40 Hits” by Joel Whitburn. I consider Whitburn’s book to be the “bible” of Top 40 music reference and still proudly own a hard copy of this excellent book.

The Billboard Book of Top 40 Hits by Joel Whitburn

Without further ado, here are my 20 favorite songs from 1980:

The first single from the album, “Against the Wind” was an excellent departure for Michigan native Bob Seger.  “Fire Lake” utilizes an acoustic guitar, which provides a wonderful mixture of R&B, folk and country blended sounds.

Yacht Rock was huge on Top 40 radio in 1980 and singer-songwriter Boz Scaggs had two terrific songs in that genre to chart that year. “Jojo” and “Breakdown Dead Ahead” further cemented the terrific guitarist as a force musically, combining smooth jazz, R&B and soft rock.

The first of two Billy Joel songs on my countdown, “You May Be Right” was a straight ahead, up-tempo rocker: Which was quite different from the piano based, power ballads that the Bronx, New York singer had recorded earlier in his career. The first single from the “Glass Houses” album, helped to solidify Joel as a premier American male vocalist during this time period.

Excellent musicianship is a calling card for the band Ambrosia and their huge summer of 1980 hit “Biggest Part of Me.”  Blending of vocal harmonies with percussion, saxophone, organ and guitar, makes this tune a classic Yacht Rock winner.

A world-wide smash, “We Don’t Talk Anymore” was the biggest selling single for Cliff Richard.  With the song peaking at number 7 in America, Richard became the first artist to reach the Top 40 of the Billboard Hot 100 during 4 separate decades:  The 50s, 60s, 70s and the 80’s.

The first of two Tom Petty songs on my countdown, “Don’t Do me Like That” became the first Top 10 hit for the leader of the Heartbreakers.  The interplay of dueling guitars and the urgent vocal delivery by Petty brings unity to this Heartland Rock classic tune.

One of the biggest Australian groups of the 70’s, Little River Band ushered in 1980 with their flowing masterpiece: Enjoying a solitary lifestyle with nature, by sailing on the ocean. “Cool Change” was named by the Australasian Performing Right Association in 2001, as one of the Top 30 Australian songs of all time.

Two of the biggest names in Yacht Rock are Kenny Loggins and Michael McDonald and this duo co-wrote the song “This Is It.”  Their collaboration included McDonald singing backup vocals on the song and it won a Grammy Award for Best Male Pop Vocal Performance in 1981. The paring of Loggins and McDonald on this tune is Yacht Rock royalty.

Nobody rocked harder than Pat Benatar on her breakthrough hit “Heartbreaker” during the first 3 months of 1980.  With hot rocking, flame throwing vocals and blazing guitars laying down catchy hooks, Benatar’s career soared in popularity during the rest of the 80s decade.

The first of two Christopher Cross songs on my countdown, “Ride Like the Wind” was the first single released from the self-titled debut “Christopher Cross” album.  Produced by Michael Omartian, and backup vocals by Michael McDonald, this hit paved the way for Cross to be the king of soft rock singing during the early 80’s.

“Magic” was the lead single from the “Xanadu” soundtrack: Which featured Olivia Newton-John both singing and acting in this musical fantasy film.  The song spent 4 weeks at number one during the summer of 1980 and is Newton-John’s second biggest hit of all time. “Magic” is yet another song that is regularly played on SiriusXM’s Yacht Rock radio here in year 2020.

Styx band member Dennis DeYoung wrote the song, “Babe” as a birthday present for his wife Suzanne.  This power ballad became the only number 1 song by Styx and was the lead single from the album “Cornerstone” and features a tremendous guitar solo by Tommy Shaw.

An excellent example of Power Pop Rock is “Romeo’s Tune” by Steve Forbert.  It was an international smash but is considered a “one hit wonder” in America. Interestingly, the title of Forbert’s only Billboard Top 40 hit doesn’t appear in the lyrics of the song.

Billy Joel’s second song on my countdown is, “It’s Still Rock and Roll to Me.”  Lyrics of Joel’s first number 1 song on the Billboard Hot 100 was a reaction to newer music styles like, New Wave and Punk Rock.  This ode to “Rock and Roll” has an awesome saxophone solo and was the biggest hit for summer 1980.

Perhaps the catchiest song during 1980 was “Cars” by Gary Neman.  I describe the song as, New Wave meets conventional pop/rock.  Traditional rhythms of guitar, bass and drums were mixed with keyboard synthesisers, and helped to produce a harmonious effect.  Neman’s single is considered one of the best “one hit wonders” of the 80’s.

Tom Petty’s second song on my countdown is “Refugee.”   This has all the elements of a perfect rock song:  Infectious guitar riffs, searing bass lines and strong dominate vocals. Superb melody, plus the call and response during the chorus, makes “Refugee” undeniably an exceptional classic rock song.

During the 70’s, Dan Fogelberg primarily released rock-oriented songs but his 1980 hit was completely different.  “Longer” was actually a melodic love song, with flowing harmonies and sparse instrumentation. Fogelberg’s crown jewel became a staple at thousands of weddings starting in 1980 and lasting throughout the rest of the decade.

“We don’t need no education, we don’t need no thought control” starts the lyrics for “Another Brick in the Wall, Part II” which is a track from Pink Floyd’s album, “The Wall.”   Written by Roger Waters, his “rock opera” protest song about rigid schooling is brilliant.  The music incorporates, progressive rock, hard rock and even has elements of disco. Without a doubt, this Pink Floyd single is a shining gem.

The biggest record of 1980 was “Call Me” by Blondie.  It was the theme song for the film “American Gigolo” and blended various forms of rock music:  New Wave, hard rock and dance rock.  Debbie Harry leads with passionate vocals, while the musicians provides catchy guitar hooks and blazing bass line interfusion. Billboard proclaims, “Call Me” as the 9th best overall single of the 80’s.

Christopher Cross’ second song on my countdown is “Sailing” and his composition is absolutely my favorite number 1 selection from 1980. Cross won 3 Grammy Awards with his written ode to sailing: Record of the Year, Song of the Year, and Arrangement of the Year.  His single also holds the distinction of being the “Greatest Yacht Rock” song of all time.  Without a doubt, my number 1 song of 1980 is “Sailing” by Christopher Cross.

For those regular readers of this music blog, it isn’t surprising that a majority of my top selections on the countdown were Yacht Rock songs.  My love for this genre of music was documented two years ago on the message, “This is It: Yacht Rock” on DJ Dave’s Musical Musings blog. 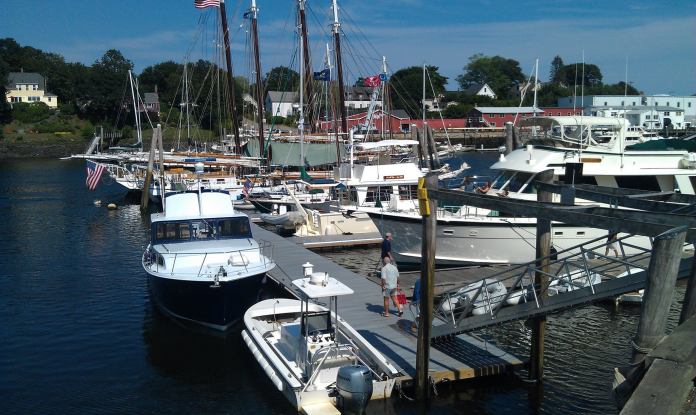 My photo of yachts and other boats in the harbor at Camden, Maine.

The second favorite type of music that I favored on my 1980 countdown is Classic Rock.  I do love many other types of music but variations of rock always dominate my preferred classification of musical genres.

Now that I have submitted my favorite song listing for the Top 20 singles of 1980, I am curious to find out your thoughts on the biggest hits from 40 years ago.

Obviously, I do not want to come across as authoritative with the critique of my favorite songs from 1980.  Your top songs maybe be completely different than my selections.  There are no right or wrong answers:  Just various opinions on the Billboard Top 100 year-end 1980 listing and my Top 20 countdown of favorite songs listed above.

What do you consider to be the best top 40 hits from 1980?  I welcome your thoughts.  The chorus for Billy Joel’s summer of 1980 number 1 hit seems like an appropriate ending to this message:

Funny, but it’s still rock and roll to me”