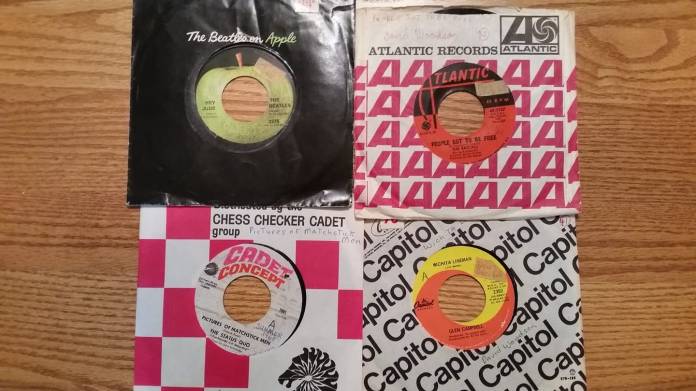 Take a sad song and make it better

Remember to let her into your heart

Then you can start to make it better”

If you asked music historians what they felt was the greatest single record from 1968, many would select “Hey Jude” by the Beatles as being the best individual song from 50 years ago.

“Hey Jude” has the distinction of being not only the top selling single from 1968 but also the biggest song for the entire decade of the 60’s according to Billboard magazine. The tune was also the first number one song to be over seven minutes long.

So I wonder: Is “Hey Jude” the best single of 1968? Although I have great respect for the Beatles and their mega hit, I feel there are some other songs that I place higher than the Fab Four’s biggest song during their career. Side note: If the Beatles had released “While My Guitar Gently Weeps” as a single in 1968, that song would be my choice as greatest song for that year.

Besides “Hey Jude”, here are some of the other top selling songs of 1968 according to Billboard:   “Love is Blue” Paul Mauriat, “Honey” Bobby Goldsboro, “(Sittin’ On) The Dock on the Bay” Otis Redding, “Mrs. Robinson” Simon and Garfunkel and “Tighten Up” Archie Bell and the Drells. However, none of those songs are on my top ten listing of best singles from 1968.

Here is the criterion am I using to determine the best single songs of 1968:

From reading my list above, you may guess that that there are some excellent songs from 1968 that don’t make my listing as they were not hits in America. Example: “The Weight” by The Band. This song ranks number 41 on the Rolling Stone “500 Greatest Songs of all Time” listing and is in the Rock and Roll Hall of Fame but only reached number 62 on the Billboard Hot 100 during 1968. It’s a great song, but not a hit in the U.S.

Here are the songs that I consider to be the best 10 singles from 1968. There are no rankings with my listing and the songs are placed in a random order. I deem the 10 songs to be culturally, historically or aesthetically significant.

“I like smoke and lightning, heavy metal thunder, racin’ with the wind and the feelin’ that I’m under. Like a true nature’s child, we were born, born to be wild, we can climb so high, I never wanna die.”

“Born To Be Wild” musically and lyrically has become a motorcycle rock anthem and is associated with the 1969 classic cult motorcycle movie, “Easy Rider.” The lyrics of “heavy metal thunder” are credited with the naming of “heavy metal” as a genre of rock music and the song was inducted into the Rock and Roll Hall Fame earlier this year. Steppenwolf’s signature song is “Born To Be Wild.”

“Are you going to Scarborough Fair? Parsley, sage, rosemary and thyme, remember me to one who lives there, she once was a true love of mine.”

Paul Simon and Art Garfunkel took an old traditional English folk ballad, “Scarborough Fair” and combined the song with Simon’s song “Canticle” which came from rewriting a 1963 Simon song, “The Side of a Hill.”   The beauty of this tune is that “Scarborough Fair” and “Canticle” are actually two songs that are sung simultaneously with alternately verses from both songs interweaved together.

This melodic anti-war song was featured in, “The Graduate” movie and is absolutely brilliant.

Donovan wrote “Hurdy Gurdy Man” when he was with the Beatles in India while studying Transcendental Meditation during early 1968. The music on this tune is considered psychedelic rock and features three session musicians who became famous just after recording this song. Those musicians: Jimmy Page on electric guitar, John Bonham on drums and John Paul Jones on bass. These three guys, along with vocalist Robert Plant formed Led Zeppelin right after laying down the track for “Hurdy Gurdy Man.”

After going through a psychedelic pop phase during 1967, the Rolling Stones returned to a more blues-rock sound and this song is known for its signature guitar riffs by Keith Richards. The distinctive guitar sound on the tune places it in the top ten of the “greatest guitar tracks” in rock music history. The Rolling Stones have also played “Jumpin’ Jack Flash” during every concert the band has performed since the song was released 50 years ago.

“It’s automatic when I talk with old friends, the conversation turns to girls we knew, when their hair was soft and long and the beach was the place to go. Suntanned bodies and waves of sunshine the California girls and a beautiful coastline, warmed up weather, let’s get together and do it again.”

After Brian Wilson and the Beach Boys recorded the landmark “Pet Sounds” album in 1966, Wilson had health issues and the group quit having hits on Top 40 radio. The band then recorded and released, “Do It Again” during July 1968 with much success. The highlight of this tune is the five-part harmony that is sung throughout the song. Once again the Beach Boys had created the magic of the “Pet Sounds” album with this summer of 1968 hit.

“It’s getting near dawn and lights close their tired eyes, I’ll soon be with you, my love, to give you my dawn surprise, I’ll be with you, darling, soon, I’ll be with you when the stars start falling. I’ve been waiting so long, to be where I’m going, in the sunshine of your love.”

The hard driving drums of Ginger Baker, the guitar playing of Eric Clapton and the excellent bass riffs and vocals on “Sunshine of Your Love” make this tune the signature song by the trio Cream. The song continues to rank as one of the greatest rock songs of all time, was voted as one of the best rock guitar riffs of all time and has been inducted into the Rock and Roll Hall of Fame.

“I am a lineman for the county and I drive the main road, searchin’ in the sun for another overload. I hear you singing in the wire, I can hear you thru the whine and the Wichita lineman, is still on the line.”

Glen Campbell soared to great heights with the Jimmy Webb-written song “Wichita Lineman” on both country and Top 40 radio during 1968. Campbell employed members of “The Wrecking Crew” to play on this tune that some have called “one of the greatest pop songs ever composed.” Carol Kaye’s guitar playing on this tune is outstanding. A truly quintessential crossover hit almost 50 years ago.

Status Quo’s only hit in America was inspired by matchstick men paintings of L.S. Lowry that depicted industrial areas of England during the 20th century. This tune features a phasing audio effect with wah-wah guitars. The record is said to be one of the first to use this technique. The distinctive four-note guitar riff throughout the song makes this a memorable song from the summer of 1968.

“All along the watchtower, princes kept the view, while all the women came and went, barefoot servants too, outside in the cold distance, a wildcat did growl, two riders were approaching and the wind began to howl.”

Bob Dylan wrote the lyrics to “All Along the Watchtower” in 1967 but it was Jimi Hendrix’s cover version of the song that put this tune on music map. Obviously with Hendrix being one of the greatest guitar players of his generation, he does an outstanding job laying the riffs down on this masterpiece. Rolling Stone magazine ranks Hendrix’s cover at number 47 on their “500 Greatest Songs of All Time” list.

“All the world over, so easy to see, people everywhere just wanna be free, listen, please listen, that’s the way it should be, peace in the valley, people got to be free.”

50 years ago this week, the Rascals had the number 1 song in America with “People Got To Be Free.” The song spent five weeks at the number one position and was a popular song of healing for our country after the assassinations of Martin Luther King, Jr. and Robert Kennedy earlier in 1968. The Rascals message of freedom was much needed for all the turmoil that America witnessed during that time period.

There you have my top ten songs from 1968. I do not proclaim that my selections are the absolute ten best tunes from 50 years ago. Now that you know my top ten songs, I would love for you to post your thoughts. What songs do you consider to be the best songs from 1968? I value your opinion on this topic. Rock on!