Can someone actually be the lead singer, electric guitarist and songwriter for a rock band while at the same time serving as a titleholder for the Miss Virginia/Miss America organization? If your name is Caroline Weinroth, the answer is yes!

Originally from Fairfax, Virginia, Caroline is currently a graduate student at George Mason University and is pursuing a Master of Fine Arts degree in Creative Writing, with a concentration in Poetry. She also earned her undergraduate degree from George Mason in Theater Performance and Audio Engineering.

While Caroline was an undergraduate at George Mason, she formed a band called Cinema Hearts with her brother Erich Weinroth. This is how Caroline describes her band: “A pageant queen fronts a rock ‘n’ roll band: Haunting harmonies soar over electric guitar in Cinema Hearts’ tribute to the Wall of Sound.”

Caroline’s Cinema Hearts band was selected “Best Local Band 2017” by Northern Virginia Magazine last year and the band has recorded two albums during their career. Cinema Hearts regularly tours at concert venues around the Northern Virginia/DC/Maryland area and also has played in major east coast cities such as New York, Philadelphia and Richmond.

In addition to her leadership with Cinema Hearts, Caroline is also a pageant queen. Two years ago, she served as Miss Mountain Laurel 2017 and last year she was named Miss Northern Virginia 2018. During both years, Caroline competed in the Miss Virginia pageant contest. Then back in January, Caroline won the Miss Roanoke Valley 2019 pageant competition. She will be vying to be crowned Miss Virginia 2019, next month at Liberty University in Lynchburg.

Being the front woman for a rock band is not always an easy thing. One prime example of the type of hardship Caroline has encountered is gender discrimination. Three years ago Caroline was on a family vacation in Corona, California and touring the Fender guitar factory when she faced an extreme dose of sexism.

Caroline describes the Fender factory experience on her blog: “I wore my She Shreds t-shirt and told the tour guide how happy I was to be at the factory, because I play a Fender Jaguar. Instead of welcoming me and treating me like the other older men guitarists in our tour group, the tour guide said, “Wow, you really play? Chicks who play are so cool.” He prodded me the whole tour, testing me with hard questions about pick-ups and gear and telling me my Modern Player Jaguar was not a “real Fender instrument.” It was hard to be reminded at the place where my favorite guitars are made, ‘You’re not part of the boys’ club’. Later that day, I cried in a hotel bathroom and wrote the lyrics to “Fender Factory.”

The song Caroline wrote that day, “Fender Factory” has become one of Cinema Hearts most popular songs. Caroline plays her Fender electric guitar with this tune as she sings the chorus, “Doesn’t make me wanna buy a Strat, when you talk to me like that.” The song has a catchy new wave/punk groove and features a guitar solo by Caroline during the middle part of the tune. The song absolutely rocks!

Although both men and women love the “Fender Factory” song, it especially resonates with women who have faced sexism not only in music but also with other areas in their lives. Here is a video of “Fender Factory” when Cinema Hearts played the song in Brooklyn, New York during March 2018:

On Caroline’s website she states what her goal is when she competes in the Miss Virginia pageant: “My platform is Music Empowerment, because I believe that music has the power to impact individuals and communities. I advocate for women and girls in music by performing with my band, speaking at music events, and collaborating with arts groups. One of my favorite groups I’ve volunteered with is Girls Rock Roanoke, a music camp for girls.”

As Miss Roanoke Valley 2019, Caroline’s community service platform is Music Empowerment, which is a movement to create civic change through music education and performance. Caroline has volunteered with Girls Rock Roanoke, Fredericksburg All Ages, Children’s Miracle Network Hospitals, and other non-profits. She works with the Arlington Art Truck, an Arlington County initiative to bring professional art experiences to schools and communities. 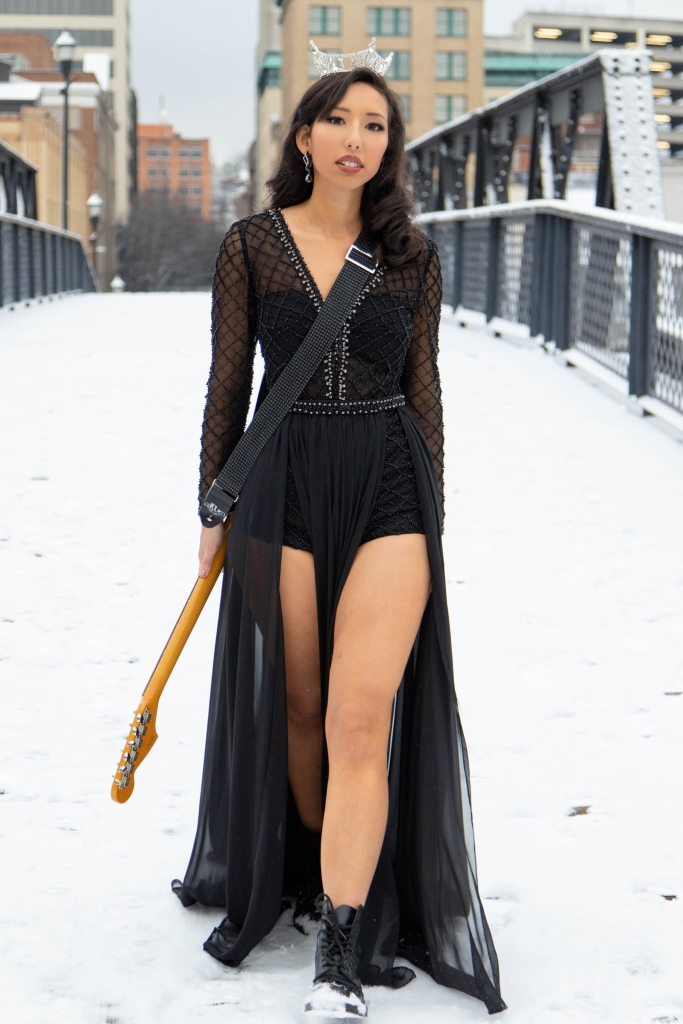 By viewing the video above,  you can tell that Caroline does an excellent job performing her cover of the John Lennon/Paul McCartney classic song on the Miss Virginia stage. And during the upcoming Miss Virginia 2019 pageant competition, she is planning to perform another song, utilizing her singing and electric guitar skills.

For those interested, both the 2017 Cinema Hearts album “Burned and Burnished” and the 2016 debut album “Feels Like Forever” are available for streaming and purchase with Bandcamp, iTunes, Spotify, and Amazon.   These albums are also available for purchase whenever Cinema Hearts performs in concert.

Does Caroline’s story resonates with you?  Would you like to see Miss Roanoke Valley be crowned Miss Virginia 2019?  If so, please view the video below and then vote Caroline Weinroth for the People’s Choice Award.

Since I first published Caroline’s story one year ago, I have been impressed with her mission of music empowerment and the dedication in which she promotes her platform. Each and every week, she is active with volunteer activities throughout the state of Virginia, helping to encourage and elevate music awareness through education. Caroline continues to be actively involved teaching, instructing and motivating young children, girls and women with musical guidance. 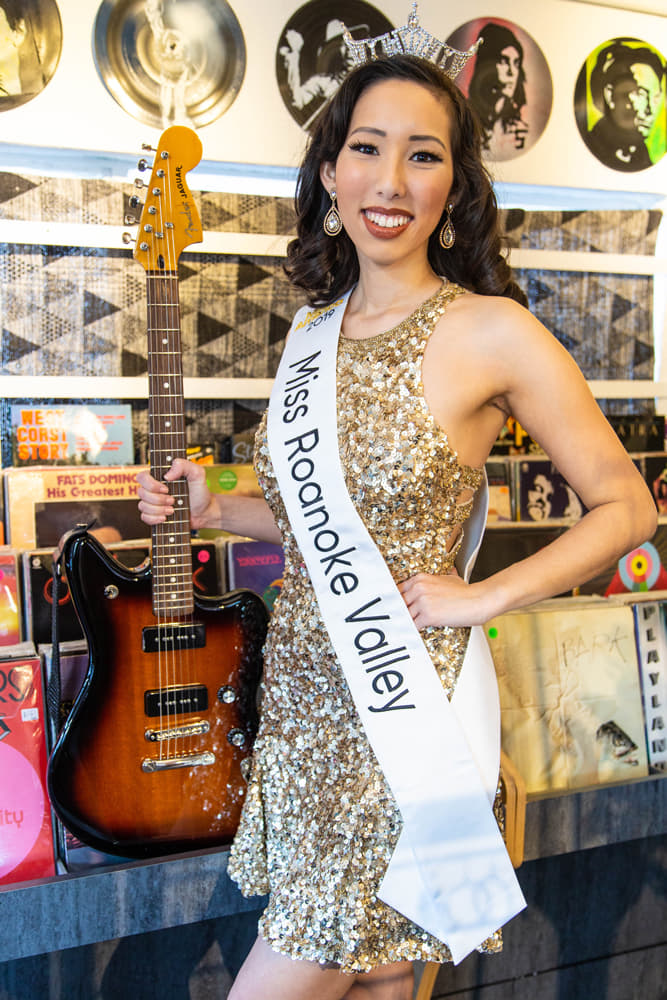 Caroline’s enthusiasm and passion to foster music empowerment throughout positive change is admirable. Her unselfish dedication to help, guide and develop young children/girls with music education is an outstanding achievement for Miss Roanoke Valley 2019.

No matter the outcome of the Miss Virginia pageant 2019 next month, I am confident that Caroline Weinroth will continue to be a positive role model for music empowerment throughout the commonwealth of Virginia.