I got my first real six string,

Bought it at the five and dime,

Played it til my fingers bled,

But when I look back now,

That summer seemed to last forever,

And if I had the choice,

Yeah, I’d always wanna be there,

Those were the best days of my life.

The “Summer of ‘69” was a time when Canadian rocker Bryan Adams was buying his first guitar and reminiscing about that summer being the “best days of his life.”

That summer of 1969 was an eventful time for those in the United States. The Vietnam War continued with over 500,000 American troops still in Southeast Asia and Neil Armstrong became the first man to walk on the moon.

During August, the Woodstock “3 Days of Peace and Music” Festival happened, with over 400,000 people attending one of the greatest events in rock music history. Meanwhile, the Beatles recorded their last album, “Abbey Road” just before John Lennon quit the legendary rock band.

The summer of 1969: “It was the best of times, it was the worst of times,” to quote Charles Dickens from his book, “A Tale of Two Cities.” 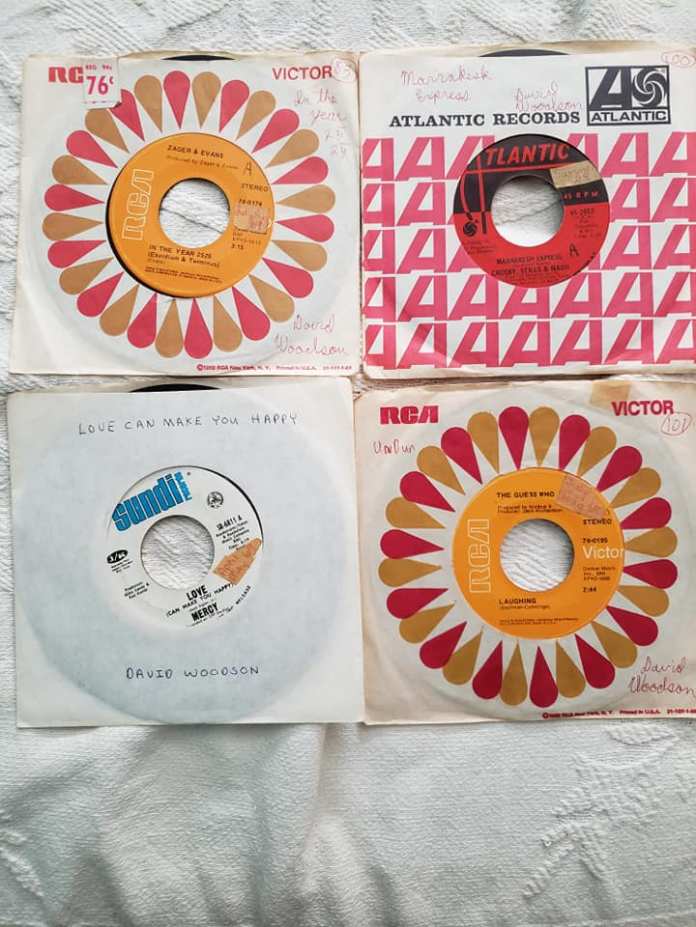 Various Records that I bought during the summer of 1969.

It was during the hot summer of 1969, that I listened to the radio 10 to 12 hours a day and made a decision that I wanted to be a radio announcer when I grew up. My pursuit to become “DJ Dave” started in the summer of ‘69.

I have fond memories of listening to Top 40 radio during the summer of ‘69. Living in Roanoke, Virginia during this time, I would mostly listen to legendary Top 40 WROV 1240 AM in the daytime, with DJs Jack Fisher, Fred Frelantz and Bart Prater. I also would occasionally tune into WBLU 1480 AM Salem, a second Top 40 station in the Roanoke radio market. WBLU DJ’s Chris Shannon, Les Turpin and Bill Cassidy played the hits, while Dave Moran was the general manager at the station.

At sundown, WROV reduced their power and WBLU signed off the air, so I tuned my radio into stations hundreds of miles away from my Virginia home. Since radio waves changed on a nightly basis, I would listen to a variety of 50,000 watt, clear channel AM stations on any given night.

The two main stations that I listened to during the nighttime were WLS 890 AM Chicago and WABC 770 AM New York. On the Big 89 WLS, Larry Lujack, Chuck Buell and Kris Erik Stevens were my favorite DJs. When listening to WABC, Dan Ingram and Cousin Brucie (Bruce Morrow) are the two radio DJ voices that I remember from that hot summer.

On nights that WLS or WABC were hard to pick up, I had other clear channel stations that I could listen to. Among those other stations: WOWO Fort Wayne, WCFL Chicago 1000 AM, CKLW Windsor, Ontario (Detroit) 800 AM, WKBW Buffalo 1520 AM and WKYC Cleveland 1100 AM.

Because I spent so much time listening to Top 40 radio that summer, I decided that I wanted to become a DJ when I became an adult. My desire to work in radio became a reality for me five years later in 1974, as I landed a remote engineer position with WROV Roanoke when I was 18 years old.

For the remaining portion of this message, I will be focusing on the music that was played on Top 40 radio during the summer of 69. I will be highlighting hits songs from 50 years ago that are still considered relevant here in 2019.

Musically, the summer of ‘69 is considered part of the “Golden Age of Top 40 Radio.” Diversity accurately describes the music that accounted for the biggest hits during that summer.

It was not uncommon to hear different genres played back to back: A DJ might start a music set with country crossover, “A Boy Named Sue” by Johnny Cash, segueing into a gospel song, “Oh Happy Day” from the Edwin Hawkins Singers and finally playing a reggae tune, “Israelites” by Desmond Decker and the Aces.

To further show the diversity of the music, here are five songs that reached number 1 on both the Billboard Hot 100 and the Cash Box Top 100 charts during the summer of 69:

1. Get Back—The Beatles with Billy Preston

2. Love Theme From Romeo and Juliet—Henry Mancini & his Orchestra

In addition to those five songs, “In the Ghetto” by Elvis Presley spent the last week of June at the number 1 position on the Cash Box Top 100 chart.

Before I reveal my Top 10 most relevant songs from 50 years ago, I am going to share some other significant songs from the summer of ‘69. 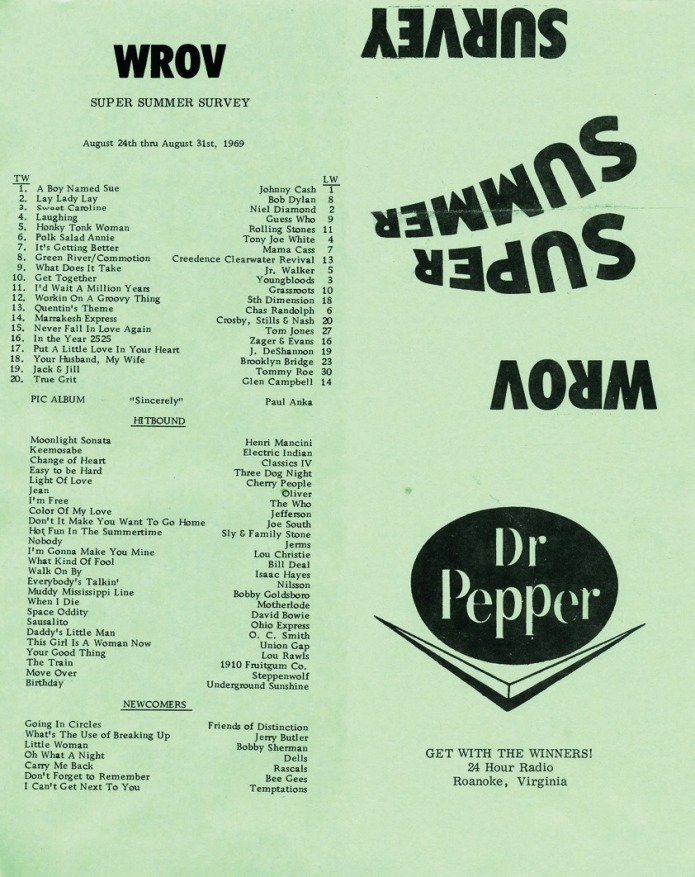 2. Love (Can Make You Happy)—Mercy

5. My Pledge of Love—Joe Jeffries Group 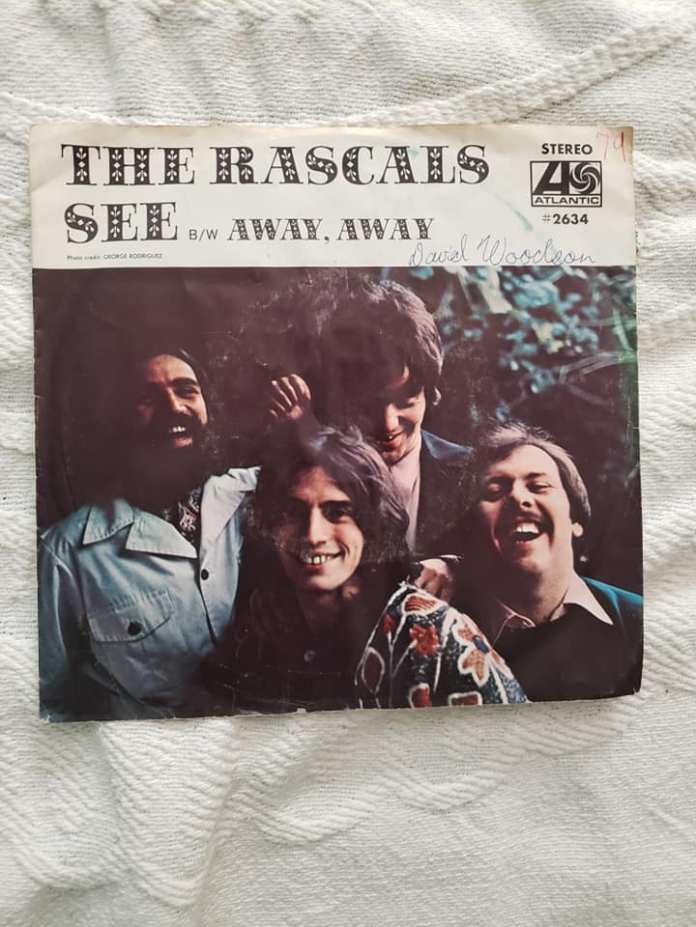 1. Grazing in the Grass—Friends of Distinction

Now I will be focusing on what I consider to be the top ten 1969 summer radio songs. These are songs were either released and/or were hits between June and September 1969.

The top ten songs that I have selected fit into the following categories: I deem the 10 songs to still be culturally, historically, aesthetically significant, meaningful or relevant. There are no rankings with my listing and the songs are placed in a random order.

My 45 RPM single of CCR’s “Fortunate Son/Down on the Corner” record that I bought in 1969.

When the Beach Boys and the Byrds started to wane on Top 40 radio, a new vocal powerhouse came upon the scene: Three Dog Night. Group members Chuck Negron, Danny Hutton and Cory Wells were all talented vocalists and their blended harmonies and vocal versatility soared with their catchy, up-tempo rock tune. “One” spent 3 weeks at number two on Cash Box Top 100 chart and was the first of 21 consecutive songs to reach the Billboard Top 40 between 1969 and 1975 for Three Dog Night.

Easy To Be Hard—Three Dog Night

Just after their song “One” became a hit, Three Dog Night had a second smash tune during the summer of 69: “Easy To Be Hard” from the Broadway musical “Hair.” Chuck Negron has excellent passion when singing the lyrics that question the harsh treatment of humanity: “How can people be so heartless, how can people be so cruel, easy to be hard?” Three Dog Night went on to have a 3rd Top 10 hit with “Eli’s Coming,” a Laura Nyro tune, during the fall of the same year.

The second CCR song to reach number 2 on the Billboard Hot 100, after “Proud Mary” in the spring of ‘69, is considered to be one of the first tunes in the “Swamp rock” genre of music. Plus, “Bad Moon Rising” has perhaps the most misheard lyric ever in modern music history. Many folks think CCR’s leader John Fogerty sings “There’s a bathroom on the right” instead of “There’s a bad moon on the rise.” “Bad Moon Rising” remains popular and is still played at many sporting events here in 2019.

Summer of ‘69 was huge for CCR. The band played at Woodstock, 4 hit singles charted and their “Green River” album was released. Then in September, the band released “Fortunate Son.” The song quickly became an anti-war movement anthem and is considered a signature song for John Fogerty. In 2013, “Fortunate Son” was added to the National Recording Registry by the Library of Congress for being “culturally, historically, or aesthetically significant.”

With the Vietnam War ongoing, Tommy James had his 3rd consecutive top 10 hit, a song longing for a future age of brotherhood, harmony and living in peace. James has been quoted multiple times, stating that the inspiration for “Crystal Blue Persuasion” came from him reading the books of Isaiah, Ezekiel and Revelation in the Bible. The melodic acoustic guitar and organ on the tune help to make this song still sound good, 50 years later.

Get Back—The Beatles with Billy Preston

A song that was originally performed at the historic Beatles “Rooftop” concert in January 1969, the single “Get Back” was the first number 1 song, on both Billboard and Cashbox charts, during the summer of ‘69. The Beatles’ “Get Back/Don’t Let Me Down” single is the only time that another artist was credited on a Fab Four recording, with Billy Preston sharing the honor for the biggest Beatles single in 1969. “Get Back” was also the Beatles’ first single released in America in true stereo.

With the catchy chorus, “Come on people now/Smile on your brother/Everybody get together/Try to love one another right now,” the Youngbloods created a timely classic with their “Love and Peace” anthem “Get Together.” American involvement in the Vietnam War remained strong in 1969 and the song was a huge hit on Top 40 radio. It was also embraced by many Christian churches during this time period, that wanted to promote “Love and Peace” in their congregations. A true quintessential song from the golden age of Top 40 radio.

Put a Little Love in Your Heart—Jackie DeShannon

It is interesting to look back on how many of the most significant songs from 50 years ago were on the subject of love and peace. Jackie DeShannon’s biggest hit record, “Put a Little Love in Your Heart” is one of those “Love and Peace” songs that resonated with radio listeners in the summer of 69. Along with DeShannon’s other big hit, “What the World Needs Now,” her message of seeking love and peace, rather than war, is still relevant today.

For most folks who think about Elvis songs, very few remember his songs of social concerns. “In the Ghetto” is completely different than almost every other Elvis tune and provided a comeback for the “King of Rock and Roll” in 1969. The Mac Davis-written song tells a narrative of generational poverty that is set in the city of Chicago. With the success of this song, Elvis charted two consecutive number 1 songs in 1969: “In the Ghetto” and “Suspicious Minds.”

When CSN played at Woodstock during August 1969, the band opened up their set list with “Suite: Judy Blue Eyes.” The song was the second single from the CSN self-titled debut album, after “Marrakesh Express” and was released as a single in September ‘69. The tune is made up of four separate sections and is seamlessly woven together by excellent harmonies of the band. Truly, “Suite: Judy Blue Eyes” is the signature song for CSN.

Now that I have humbly submitted my thoughts on the most significant singles from the summer of 1969, I am curious to find out your opinion on the music from 50 years ago.

Obviously, I do not want to come across as authoritative with my critique of music from the golden age of Top 40 radio. The songs that you feel are the best from the summer of 1969 could be completely different than my selections.

So I am asking for your opinion: What songs do you feel are the best, greatest or most significant singles from the summer of 1969?

Listening to the music on Top 40 radio in 1969 highlighted some of the best days of my life. Rock on!

I leave you with the ending lyrics to “Crystal Blue Persuasion:”

When he looks down,

On every green field,

All of his children,

There’ll be peace and good,