Talking Heads 1980 legendary song “Once in a Lifetime” uses the phrase “You may ask yourself” multiple times on this Rock and Roll Hall of Fame inducted song.

You may ask yourself: What is “Radio Free Roanoke” and what does it mean?

Radio Free Roanoke (RFR) is a 100-watt non-commercial, non-profit grassroots community FM radio station located in Roanoke, Virginia. On April 12th, 2018, WROE-LP 95.7 FM signed on the air for the first time. Radio Free Roanoke is now broadcasting and has become a part of the local radio community here in the Roanoke Valley.

You may ask yourself: Why does Roanoke actually need another radio station? Radio-locator.com states that there are “56 radio stations that may be within distant listening range of Roanoke, Virginia.”

Of those 56 stations, fourteen signals are with AM stations while the remaining forty-two signals are FM stations. While many of those radio facilities broadcast the same station on multiple frequencies, the Roanoke/Lynchburg market is still saturated with radio outlets.

With today’s broadcasting landscape, most radio stations are for-profit commercial facilities and are owned by large corporate companies. The days of small independently owned radio stations are almost extinct and have gone the way of the Dodo bird. 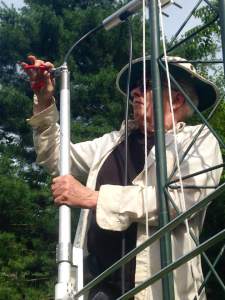 Five years ago, Executive Director of Radio Free Roanoke Robert Capper had a vision that he wanted to create a non-profit, grassroots, local community radio station for Roanoke. He started in April 2013 to obtain a license and equipment and to build community support for this type of radio station. It took nearly five years to complete the process for Capper’s vision.

Capper finally was able to see his dream of a radio station broadcasting in Roanoke when RFR signed on for the first time on April 12th, 2018. The next day TV station WDBJ7 aired a short clip about the opening of RFR.

Opening any new radio station poses challenges but this is especially true for RFR. Besides the financial cost of running RFR, the 100-watt output from the stations’ antenna limits the range of the RFR coverage area.

The coverage map for RFR is a five-mile radius from the broadcast antenna tower location in southwest Roanoke city. That means portions of Salem, Vinton and Roanoke County are not able to pick up RFR and this limits the amount of residents that can listen to and enjoy RFR programming.

Heather Rose is the Corporate Vice President and Program Manager for RFR and she expressed to me one of the most pressing needs for the radio station: Streaming RFR online.

The station currently is not able to stream their signal on the Internet because of the cost. An exceptional gift to RFR would be for someone to underwrite the cost of streaming the RFR signal on the Internet for an entire year. That would be huge and would allow those living outside of the five-mile RFR coverage area to receive the radio station broadcast in their homes.

One of the RFR goals is to have grassroots community programming on the station, according to Robert Capper. Radio staff and other volunteers with RFR meet weekly at the Roanoke Natural Foods Co-op to discuss business that is associated with the new station. Anyone from the Roanoke community is also welcomed to attend these meetings.

I have actually attended two of the RFR weekly meetings to get a feel for how the staff and volunteers are proceeding in relation to community involvement. Capper told me at one of the meetings I attended that RFR wants to add more local content. One of current programs aired on RFR is on the controversial proposed Mountain Valley Atlantic Coast Pipeline. RFR regularly airs programming on the issue that is important to those living in Southwest Virginia and the Shenandoah Valley area.

The station also wants more folks in the Roanoke community to submit ideas for new community programming. Community member Cedric Wilson, who currently works in the mental health profession in the Roanoke area, has proposed producing a weekly program on the subject of psychology. Wilson hopes to include topics such as emotions, human behavior, the brain, mental health, addiction, culture, religion and relationships on this new radio endeavor.

Another area where RFR separates itself from all other radio stations in Roanoke is with music. Music director Geoff Conley has been responsible for providing local Roanoke area music artists with the opportunity to have their music played in regular rotation on a daily basis. Currently, RFR is playing music from twenty-five local Roanoke artists and hopes to expand the airing of more local music in the near future.

Hearing local Roanoke music on RFR has been a dream come true for Camellia Delk, who is the keyboard and violin player for the Roanoke-based band The Bastards of Fate (BOF).   The BOF band member loves the fact that RFR is playing local artists along side established music artists such as The Cure, Depeche Mode, Nine Inch Nails, Cocteau Twins and The Smiths.

When I asked Delk about what RFR means to her she replied, “On my way to work this morning I heard ‘One True Love’ by The Bastards of Fate – never dreamed I’d hear THAT one on the airwaves! Also heard the song ‘Ohio’ by The Wading Girl (I play violin on that track). It’s not only neat to hear my music but also fun to hear my friends’ bands Eternal Summers, Atoka Chase, Doug Cheatwood, Another Roadside Attraction, and Sad Cobras being played alongside Bjork, Kate Bush, Faith No More, Nina Simone! I can’t stress how grateful I am to be able to turn on the radio and actually enjoy it!”

Since starting broadcast in April, RFR has attempted to create a radio experience that is completely different than what the rest of the radio stations are doing in the Roanoke/Lynchburg market. As Executive Director Robert Capper sees it, “RFR will continue to grow and change as more people come to volunteer and become a part of our radio community.”

Vice President Heather Rose also shares Capper’s thoughts on the growth of RFR. Rose also hopes that more folks will volunteer their services with many various activities that are required to maintain smooth operations with the radio station.

To contact RFR staff members about programming ideas, scheduling, where to volunteer, how to donate financially or to leave feedback, visit their website. Also be sure to connect with them on Facebook.

Radio Free Roanoke is new and growing but currently has a small audience. I would love for RFR to have a larger listening area but without Internet streaming, it won’t be possible.

It would be my hope that someone who reads this blog would be able to underwrite the cost of Internet streaming of RFR online for an entire year. The staff of RFR would be extremely excited if folks all over the Roanoke Valley could enjoy listening to Radio Free Roanoke no matter where they lived. That would be awesome.

2 thoughts on “Radio Free Roanoke: A New Way to Listen”